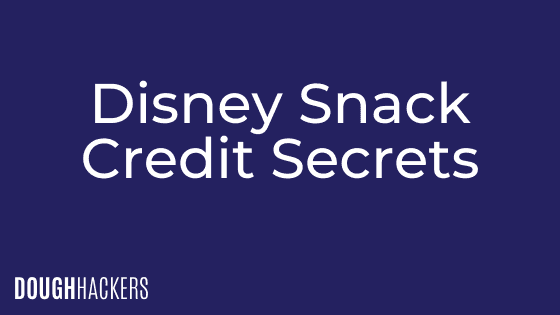 So you’re going to Disney World/Land.

First off, let me just say: can I go with you?

Second off, let’s dive deeper into how to hack the Disney Dining Plan snack credit.

How To Hack the Disney Dining Plan Snack Credit

I’m sure I’m going to get a lot of people in the comments fighting me about whether or not the Disney Dining itself is even worth it.

But I’ll just say as the wife/eventually-mom in the family, it’s f*cking worth it.

So I’ll quickly break down the Disney Dining Plan.

What You Need To Know About The Disney Dining Plan

First, the Disney Dining Plan (DDP) can only be added if you’re staying on-site at Disney. (This does count if you’re camping on Disney grounds, so that’s kinda cool!)

And the DDP is based on the amount of nights you stay there (note: it can’t be added to only part of a reservation… but I have a few tricks up my sleeve).

But here’s the break down of each of the three DDPs for 2020:

So once you pick the one that best suits your family, you can see that all of them come with 2 Snack Credits per person per night.

So we usually do the Regular Dining for me and Shawn.

That means we have a total of 4 snack credits a day.

Now, you get all of these credits at once, and you don’t have to spread them throughout your stay evenly. You could literally use all your snack credits on day one.

I’m not sure why you would, but you can!

A quick note to all the Disney Dining Critics: the whole point of this blog is to help you get more bang for your buck without sacrificing anything.

That last part is the key.

When you aren’t on the Disney Dining Plan, you’re probably not going to go to the fun restaurants or do character meals.

You’ll probably have to tell your spouse kids that “no, we aren’t getting the insanely yummy popcorn or the donut that’s twice as big as your head.”

The Disney Dining Plan is one way we’re able to let our guards down and just enjoy being on vacation. But we can do that because we know how to hack it!

Ok, back to our regularly scheduled programming.

How To Maximize The Disney Dining Plan Snack Credit

So what qualifies as a snack varies pretty drastically.

It can be a single bottle of water to those huge donuts I was talking about earlier.

One of the ways to identify immediately is by looking for this icon next to an item on a menu:

Roughly speaking, a Disney Snack Credit is worth about $5, but there are some things that qualify as a snack that are much less or much more than that.

Get The Most Bang For Your Buck

This is pretty obvious, right?

Don’t go spending your snack credits on bottles of water or a bag of chips.

Save them for the good stuff. The big stuff.

I feel like people understand this in the moment, but I really need you to internalize this.

The last Disney trip we went on, my sister (I love her so much) spent snack credits on small bags of pretzels because we forgot to eat breakfast before going to Animal Kingdom.

It was the first thing she saw and her kids were demanding sustenance.

Then we walked a little bit further into the park and we saw those lovely, huge donuts from Joffrey’s coffee stand.

And we spent another snack credit on that.

But this time, it fed both her daughter and herself.

And it was about $5 for that thing. Well worth the Snack Credit.

A short list of the best snacks to maximize your Disney Snack Credit are (I bolded my favorites):

Have you heard about Epcot’s Food & Wine Festival?

If you’re a foodie, you’ll definitely want to check this out.

This is one of the busiest times at Epcot, but it’s well worth it. During this festival, you’ll be able to make your way to each country’s booth and sample some food.

If you aren’t on the Disney Dining Plan, it’s really easy to spend a lot more than you intended.

However, be mindful that not every dish is made equally.

Meaning, a sample at one booth could easily be split between you and your spouse.

However, another sample elsewhere could barely be enough for yourself to have a taste.

Some of the most popular recommendations are:

Get Creative With Your Disney Snack Credit

Some people are strict rule followers.

But what about when the rules don’t say anything?

A lot of people operate thinking that the only things you can use the snack credit for are those things definitely marked as snacks.

But that’s not entirely true.

(and sometimes this hack just depends on the cast member)

But there have been times where we’ve been able to get a little creative on what counts as a Disney Snack Credit.

For example, say you’re at a QS station and you or someone else in the party isn’t exactly starving… But they do want something to eat.

And taking the food to-go isn’t always an ideal option… So, what do you do?

Instead of wasting a QS meal on a kids meal (because you think you could probably finish the kids meal) try asking the cast member if you could get a side of _________ for a Disney Snack Credit.

That could be a side of mac n’ cheese, fries, chicken tender, or a salad.

Sometimes I just straight up ask “is there anything not on the menu that I could get for a Snack Credit?“

And sometimes they’ll tell you no.

I find that it usually works if the food in question isn’t pre-portioned. Like fries or pasta.

And you won’t waste food or credits, win-win!

It pays to be creative and to just ask for what you want.

No Disney Snack Credit Left Behind

I’m sure you’ve heard this advice time and time again.

If you have any snack credits left over on your last day… just take them to go!

There are tons of candies and treats that are pre-packaged that you can hide in your carry-on or eat on your drive home.

Some of the fan favorites are Mickey rice krispy treats, Goofy’s candy, and bags of popcorn.

And most resorts have a little “convenience store” area where you can get breakfast-y types of meals.

On our last day, we usually use all the left over snack credits on breakfast.

I get parfaits, boiled eggs, and donut holes. (it’s all about balance)

It’s actually pretty easy; you just need to be prepared.

Do your homework on the best snacks that can feed more than one person.

Try and visit during an Epcot festival or holiday (Halloween and Christmas).

And be sure to get creative on what you can get as a snack!

Let us know how you maximize your snack credits (or what you like spending them on the most when you go) in the comments below!